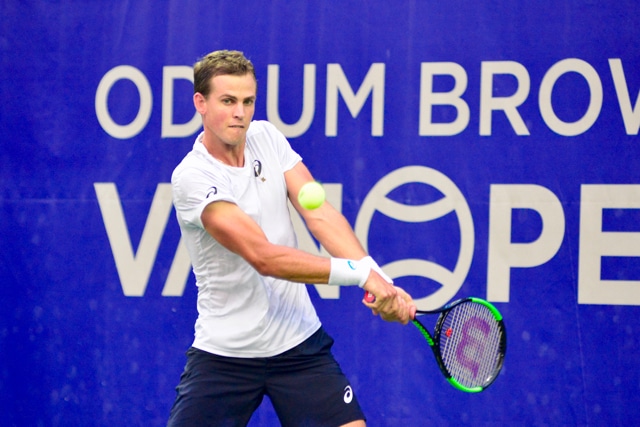 The men’s main draw for the 2019 Odlum Brown VanOpen took place on Saturday at the host Hollyburn Country Club.

Highlighting the round of 48 is a match-up between former World No. 25 and 2013 Odlum Brown VanOpen champion Vasek Pospisil and Colin Sinclair from the Northern Mariana Islands. Pospisil is one of six Canadian players who will take the courts in the first round of the tournament.

Toronto’s Peter Polansky and North Vancouverite Filip Peliwo will each play against a qualifier in their return to Vancouver. Benjamin Sigouin, who is also from Vancouver, takes on American JC Aragone while Liam Draxl of Newmarket, Ontario faces a tough match against veteran Belgian Ruben Bemelmans. Laval, Quebec’s Alexis Galarneau meets Maxime Cressy of the USA.

The top 16 seeds in the men’s singles main draw each received byes into the second round, including top seed and World No. 77 Ricardas Berankis and Brayden Schnur of Toronto, who is the fourth ranked men’s player in Canada, behind only Milos Raonic, Felix Auger-Aliassime and Denis Shapovalov. Berankis will open up against the winner between Peliwo and a qualifier. Schnur meets the winner of a match between China’s Zhe Li and Akira Santillan of Australia.

A late addition to the draw is former World No. 21 Steve Johnson. The 29-year-old American has finished five straight seasons in the top 50 (2014-18) and has four career wins over top 10 players. Johnson is the Odlum Brown VanOpen’s No. 2 seed and will play the winner between Tallon Griekspoor of the Netherlands and Ecuador’s Roberto Quiroz.

In total, six of the players in the men’s main draw are currently ranked in the top 110 in the world. The complete men’s singles main draw is available here.