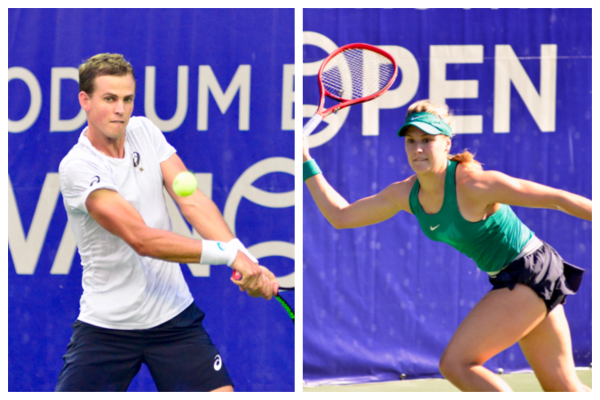 Fans chanted “Let’s go Vasek” as another sold out crowd at the Odlum Brown VanOpen saw hometown player Vasek Pospisil battle back from losing the first set to move on to the quarterfinals with a 5-7, 6-3, 6-2 win over Aussie Marc Polmans on Thursday night.

“I love these types of atmospheres, I love these types of crowds, it’s why I love playing tennis so much. It was another tough one, no match is easy on any ATP Tour, especially in front of the home crowd sometimes I’m a little extra nervous, but I’m just happy to have gotten through,” said the former World No. 25 post-match. “Honestly, I thought I played pretty well there in the last couple of sets, and I’m thrilled to make it to the next round.”

Pospisil, who was born in Vernon, BC, but spent much of his youth in Vancouver, will face South Africa’s Lloyd Harris on Friday. It is the first ever meeting between the two. Pospisil is looking to become the first Canadian men’s player to repeat as Odlum Brown VanOpen singles champion. He previously won the title in 2013.

After a dominant effort in her opening match, Eugenie Bouchard faced a tougher test on Thursday against tournament No. 1 seed Kateryna Kozlova of Ukraine. After taking the first set 6-4, the Montreal native dropped the second set 5-7 before cranking it up in the third to win 6-1.

“It was a really tough match, she’s a solid player so I had to keep fighting. I definitely raised my level in the third, which helped,” said Bouchard. “I was wondering why I didn’t have that in the second, but I still got the win, so it’s okay.”

Meanwhile, Vancouver’s Rebecca Marino, who is a wild card at the tournament, continued her remarkable comeback as she upset No. 2 seed and former World No. 12 Yanina Wickmayer of Belgium 7-5, 7-5 to advance to the quarterfinals. Her best career results at the Odlum Brown VanOpen came in 2008 and 2009, when she also made it to the quarterfinal round. Marino will face qualifier Martina Trevisan of Italy on Friday.