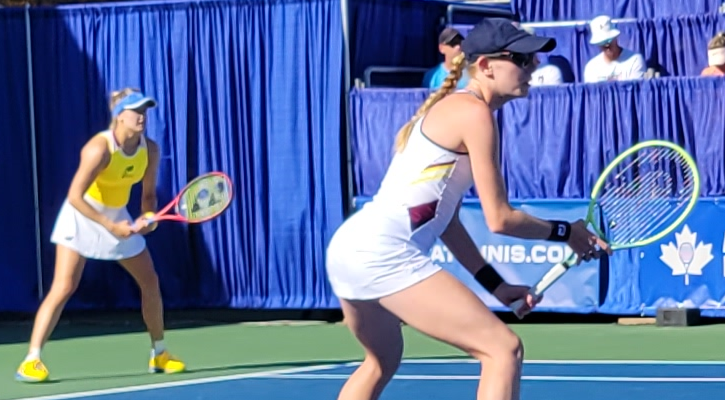 After 17 months out of action due to an injury, Canada’s Eugenie Bouchard made her return to pro tennis in doubles action at the Odlum Brown VanOpen WTA 125 event on Sunday and came away with a victory.

Bouchard, 28, partnered with fellow Canadian Kayla Cross, who is 11 years Bouchard’s junior, to top the Italian pair of Lucia Bronzetti and Elizabetta Cocciaretto. The Canadians cruised to a 6-1 win in the first set before Bronzetti and Cocciaretto rallied back to take the second set 7-6 (3). Bouchard and Cross returned to form in the tiebreak, winning 10-4.

“I was just happy to be out there, so happy to have a partner like Kayla, she did really amazing,” said Bouchard, who is a former World No. 5 player in singles. “We both like to play really aggressive, so we just tried to find that again (in the tiebreak).”

Despite being pretty unfamiliar with each other, Bouchard and Cross’s comfort level grew as the match went on. “In the second (set), we got a little bit tight but I think we were still trying to be as aggressive as we could,” explained Cross. “It’s the first time we’ve played together, so (we’re) learning about each other and we did a really good job.”

Despite her first match in almost a year and a half being a win, Bouchard was just as happy for Cross because the victory was her first at a WTA event.

“It’s a big day for both of us today,” added Bouchard with a smile. She is set to face Arianne Hartono of France in the first round of singles play on Tuesday.

Marko Stakusic, who is a wild card entry into the qualifying round, is the lone Canadian left in men’s qualifying after he topped seventh seed Michail Pervolarakis of Greece 6-3, 6-4. The 19-year-old hails from Etobicoke, ON.

Matches at the Odlum Brown VanOpen continue on Monday, August 15 at 10 am, featuring the final round of men’s qualifying, and the first round of the men’s and women’s singles and doubles main draws.