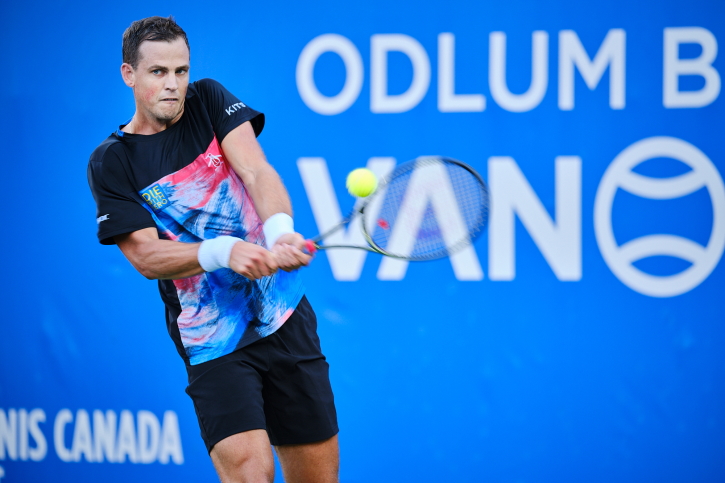 A sold-out, hometown crowd at the Odlum Brown VanOpen on Wednesday night lifted Vernon, BC’s Vasek Pospisil to a gutsy 3-6, 6-2, 6-3 win over Australian Jordan Thompson and booked his spot in the quarterfinals at the ATP Challenger Tour 125 event.

“It was very tough. I got a second wind in the third set, but I was feeling terrible and I don’t know how I pulled through, to be honest. (I just had) brain fog, and sweat through my whole bag,” explained a visibly exhausted Pospisil in a post-match interview with Odlum Brown VanOpen Tournament Director Rik de Voest.

Pospisil, a 32-year-old who resides in Vancouver, professed that the robust crowd support was integral to his success in the match. He’s now set to face former World No. 6 Gilles Simon of France in a quarterfinal match on Friday. The 37-year-old Simon punched his ticket to the quarters with a 2-6, 6-3, 7-6 upset of No. 2 seed Jiri Vesely of the Czech Republic.

Marino and Watson meet the third-seeded team of Nao Hibino of Japan and Oksana Kalashnikova of Georgia in one of three quarterfinals on Thursday. The Canadian duo of Eugenie Bouchard and Kayla Cross take on top seeds Miyu Kato of Japan and American Asia Muhammad in Thursday’s evening feature match on Centre Court.