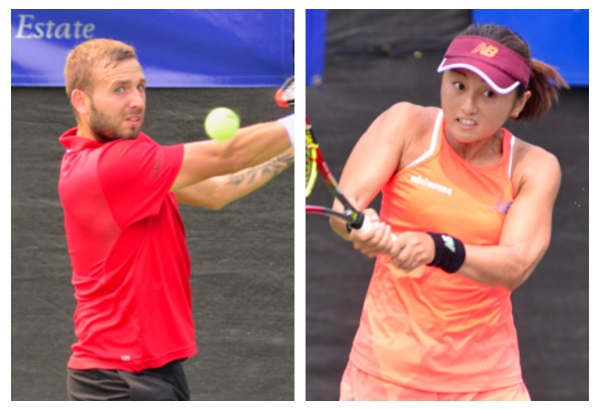 Five years after being a finalist, Great Britain’s Daniel Evans won his seventh straight match in three sets to become the 2018 Odlum Brown VanOpen Men’s Singles champion. Evans, who was in the tournament as a qualifier, lost the first set, but fought back to take the match against Aussie Jason Kubler 4-6, 7-5, 7-6(3) in just under three hours.

“It was a tough week, but it doesn’t feel that tough when you come to this club every day. It’s unique, especially on the Challenger Tour, really there are some Tour events not as good as this tournament. The crowd is incredible, they come out to the matches every single day – some of the matches aren’t that great, my own included,” laughed Evans. “To win is great, and I really enjoy every time I come to Vancouver.”

For the 28-year-old Evans, it’s his first win on the ATP Challenger Tour in two years and sixth title overall. As for Kubler, despite the loss, he will be in the top-100 when this week’s rankings come out and it’s the first time he has cracked the milestone.

Fans got their money’s worth on Sunday as the women’s championship final also went to three sets and took well over two hours to play. In the end, it was former World No. 30 Misaki Doi who won, beating Heather Watson of Great Britain 6-7(4), 6-1, 6-4. The win is Doi’s sixth singles title on the ITF Pro Circuit. It’s also the richest ITF event she’s won and first tournament crown since January 2015.

In men’s doubles, Neal Skupski defended his Odlum Brown VanOpen men’s doubles title on Sunday – albeit with a different partner. The Liverpool native won last year with American James Cerretani, but this year, he and compatriot Luke Bambridge took the crown with a 4-6, 6-3, (10-6) victory over the Australian team of Marc Polmans and Max Purcell.

Skupski, who was playing just his second tournament with Bambridge as his partner, joins Treat Huey, Rik de Voest, Travis Parrott, Ashley Fisher, and Eric Butorac as multiple men’s doubles winners at the Odlum Brown VanOpen. Skupski and Bambridge were seeded second heading into the tournament.