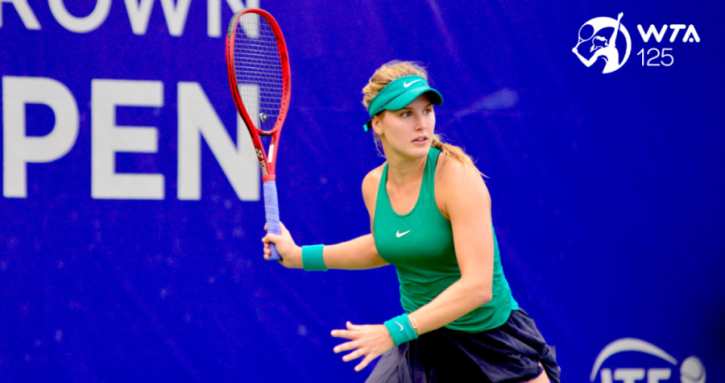 The Odlum Brown VanOpen is pleased to announce that former World No. 5 Eugenie Bouchard makes her return to professional tennis at the WTA 125 event at Hollyburn Country Club from August 13 – 21 after receiving a wild card into the women’s main draw.

The 28-year-old from Montreal hasn’t played since suffering a shoulder injury in March 2021. At Wimbledon in 2014, Bouchard became the first player representing Canada to make it to the final in singles play at a Grand Slam tournament.

The 2016 Canadian Olympian holds two career WTA titles, one in singles and one in doubles. Bouchard also has a dozen career wins over top-10 players including four victories against former World No. 1 Angelique Kerber.

She was Tennis Canada’s Female Player of the Year from 2013-15 and claimed the Bobbie Rosenfeld Award as Canadian Female Athlete of the Year in 2013 and 2014.

Other players receiving Odlum Brown VanOpen main draw wild cards are Carol Zhao on the women’s side, and Alexis Galarneau and Gabriel Diallo on the men’s side.

Zhao was the number one ranked women’s player in Canada as recently as 2018, when her WTA ranking hit a career-high World No. 131. The 27-year-old from Richmond Hill, Ont. played at the last three editions of the Odlum Brown VanOpen, advancing to the semifinals in 2017.

She turned pro in 2016 after playing NCAA tennis at Stanford University, ending her college career by leading the Cardinal to the 2016 NCAA championship. Zhao owns four career ITF singles titles, including one in a $25K event in South Korea in June and one last month at a $100K event in Charleston, SC.

Galarneau, who was previously announced as a participant in qualifying at the Odlum Brown VanOpen, will now play in the main draw after being awarded a wild card. His current ranking of World No. 237 is a career-high.

The 23-year-old is coming off an appearance in the final at last month’s Winnipeg National Bank Challenger. He was named an Intercollegiate Tennis Association All-American in 2020 and 2021 at North Carolina State and earned First Team All-Atlantic Coast Conference honours in 2018, 2019, and 2021.

Diallo, like Zhao and Galarneau, is making a mark in US college tennis as he enters his fourth season at the University of Kentucky later this fall. In 2021-22, he appeared in every college tennis singles ranking, peaking at No. 4, and finishing the year at No. 8.

The 20-year-old has twice been named to the All-Southeastern Conference First Team and led Kentucky’s men’s tennis team in total wins with a 38-8 record. The 6-foot-7 Montrealer is currently the eighth-best ranked men’s player in Canada.