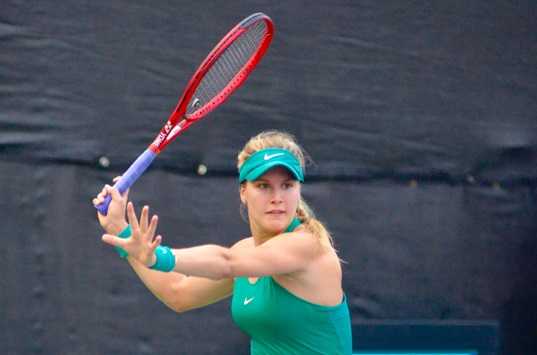 A sold out crowd welcomed Eugenie Bouchard back to the Odlum Brown VanOpen for the first time since 2011. The former World No. 5, who is currently ranked No. 128, made short work of Veronica Cepede Royg of Paraguay, winning 6-2, 6-2 in an hour and ten minutes.

Bouchard was definitely cognizant of the raucous crowd but acknowledged post-match that it didn’t distract her. “I was just trying to stay focused and I’m happy I did that throughout the whole match,” she said. “It’s fun to have the crowd support me and I really appreciate it.”

The Montreal native will face the Odlum Brown VanOpen’s top women’s seed on Thursday as she’s set to take on Kateryna Kozlova, who is currently ranked World No. 90, in the second round. It is the first career meeting between the two.

In other action on Wednesday, Vancouver’s own Rebecca Marino was also successful in her return to the Hollyburn courts. Playing the Odlum Brown VanOpen for the first time since 2011, the 27-year-old needed three sets to knock off Naomi Broady of Great Britain 4-6, 6-1, 7-5. Marino faces number two seed Yanina Wickmayer of Belgium in the second round.

Matches continue Thursday, August 16 at 10 am, with Bouchard, Marino, and Vasek Pospisil among those in action. The day features Men’s and Women’s Second Round Singles along with Men’s and Women’s Doubles Quarterfinals.