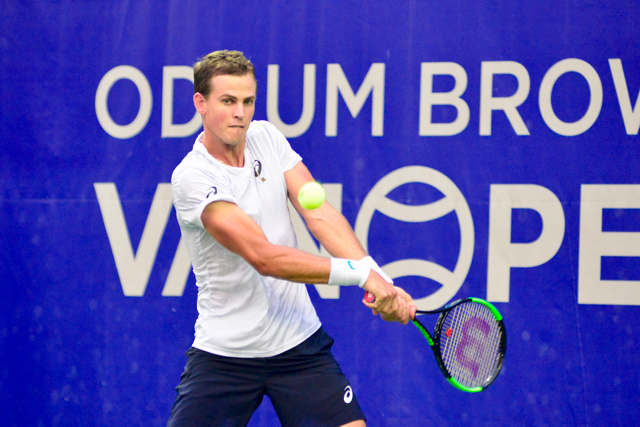 Since he arrived in Vancouver late last week, Vasek Pospisil has emphasized how much this is his “home” tournament. The 28-year-old was born in Vernon, grew up in Vancouver, and won the Odlum Brown VanOpen singles title in 2013 – so it’s easy to understand why Pospisil considers it home.

On Tuesday night, he made his return to Centre Court and gutted out a tough 7-6, 3-6, 6-3 win over fellow Canadian and Vancouverite Benjamin Sigouin. The 19-year-old was no pushover and at one point was leading 3-2 in the third set before Pospisil battled back to win four games in a row.

“I’m very happy to be through, I knew it was going to be a tough one. He’s a very talented young player, I thought he played really well and I had to be sharp,” said Pospisil, who won the Men’s Doubles title at Wimbledon in 2014 and has a career high World No. 25 ranking.

In the first round of women’s main draw doubles, the Canadian team of Rebecca Marino and Carson Branstine needed a tiebreaker to get by the third seeds Alexa Guarachi of Chile and Erin Routliffe of New Zealand, 6-3, 3-6, 10-6.