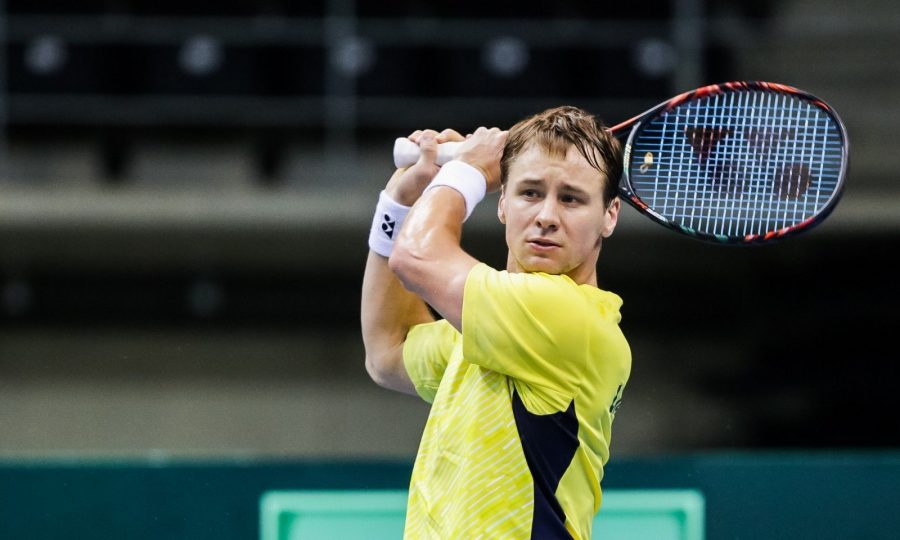 The Odlum Brown VanOpen is pleased to announce the men’s field which will compete in the $108,320 USD ATP Challenger Tour event August 12 – 18 at Hollyburn Country Club.

The initial men’s main draw list is among the strongest in the tournament’s 17-year history with 22 different countries represented. The players on the list include 2014 Wimbledon doubles champion Vasek Pospisil and World No. 97 Brayden Schnur, two Canadians announced last month as committed to playing at the Odlum Brown VanOpen.

“Our men’s draw this year offers exceptional depth. We have former top 20 players, ATP Tour winners and players with wins over the likes of former World No. 1 Roger Federer,” said Tournament Director Rik de Voest. “Fans will enjoy quality world class tennis every day they come out to watch.”

Overall, twelve of the men’s participants competed in the main draw at Wimbledon last month. The field also includes four players ranked within the World Top 100 at the time of the acceptance list being released by the ATP.

In addition to Schnur on the acceptance list, Lithuania’s Ricardas Berankis is World No. 75, Thiago Monteiro of Brazil is ranked No. 91, and Bosnia and Herzegovina’s Damir Dzumhur is 92nd overall.

Berankis‘ career high singles ranking is No. 50 and he’s reached the second round or better at eight Grand Slams. The 29-year-old is the first and only Lithuanian to be ranked in the ATP top 100. He’s a two-time ATP World Tour finalist and was also the men’s singles finalist at the 2010 Odlum Brown VanOpen.

Monteiro has six career wins over players who have been ranked in the ATP top 10. The 25-year-old Brazilian reached a career high singles ranking of No. 74 in February 2017, the same year he made his Grand Slam main draw debut at the Australian Open. At the 2016 Rio Open, Monteiro upset then World No. 9 Jo-Wilfried Tsonga in the first round.

Dzumhur was ranked World No. 23 as recently as July 2018. The 27-year-old reached the third round twice at the Australian Open and French Open, as well as once at the US Open. He also has a career win over former World No. 1 Rafael Nadal. Dzumhur is also the first male player to represent Bosnia and Herzegovina in the main draw of any Grand Slam tournament.

Other notables include Poland’s Kamil Majchrzak, who’s ranked World No. 102, Malek Jaziri of Tunisia at World No. 103, Argentinian Guido Andreozzi at No. 109, World No. 115 Evgeny Donskoy of Russia, and No. 119 Yannick Maden and World No. 121 Dominik Koepfer, both from Germany.

Majchrzak is the second-highest ranked men’s player from Poland. The 23-year-old made his Grand Slam main draw debut earlier this year at the Australian Open, winning the first two sets against former World No. 4 Kei Nishikori before retiring due to injury. He won his first career ATP Challenger Tour event this past March and claimed his second in May.

Jaziri, 35, reached a career high of World No. 42 earlier this year. He has career wins over former World No. 3s Alexander Zverev and Grigor Dimitrov. The Tunisian has played in the second round or better in nine Grand Slam tournaments. Jaziri made his first ATP World Tour final appearance at the 2018 Istanbul Open.

The 27-year-old Andreozzi has a career high ranking of World No. 70. He made his Grand Slam main draw debut at the US Open in 2012 and is a winner of eight career ATP Challenger Tour titles. The Argentinian made his ATP Masters 1000 main draw debut this year, earning first round wins in Indian Wells and Miami.

Russia’s Donskoy ended five of last seven seasons ranked in the top 100. The biggest win of the 29-year-old’s career came at the 2017 Dubai Tennis Championships, where he saved three match points to beat former World No. 1 Roger Federer. Donskoy reached the third round of the Australian Open and US Open in 2013, and has 14 career ATP Challenger titles.

A year after being a quarterfinalist at Hollyburn Country Club, Maden returns to the Odlum Brown VanOpen once again this year. The 29-year-old German is a three-time Grand Slam main draw participant, including making it to the second round at Roland Garros earlier this year. Maden was ranked as high as World No. 96 earlier this year.

Koepfer is coming off a run this summer that saw him win the Ilkley Trophy as his first career ATP Challenger Tour singles title in June, and gain a main draw wild card for Wimbledon, where he beat former World No. 26 Filip Krajinovic in the first round. It was the Grand Slam debut for the 25-year-old German, a two-time college All-American for Tulane University.

Tickets for this year’s tournament are available online at https://vanopen.com/tickets