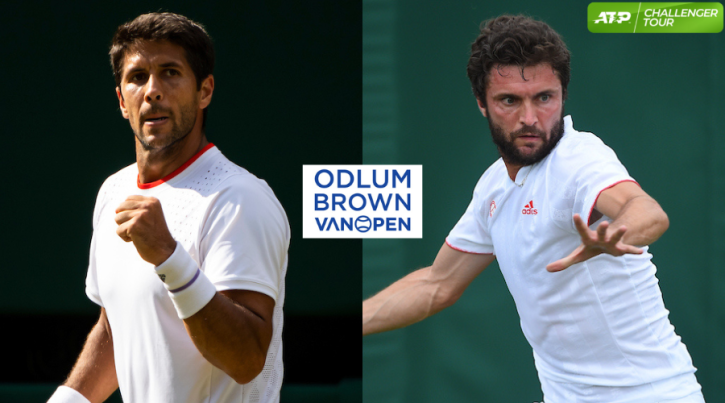 The Odlum Brown VanOpen is pleased to highlight four notable men’s players who will play at the $159,360 USD ATP Challenger Tour event from August 13 – 21 at Hollyburn Country Club. These players are in addition to the men’s official player acceptance list which was announced on July 28.

Spain’s Fernando Verdasco is tied for second all-time in main draw Grand Slam appearances with 70 during his career. His best result in a Grand Slam was reaching the semifinals of the Australian Open in 2009 and he also reached his career-high singles ranking that same year, hitting No. 7 in April 2009.

The 38-year-old has reached the fourth round or better 11 times at Grand Slams, including the quarterfinals at the US Open in 2009 and 2010, and Wimbledon in 2013. Verdasco also has 28 career victories over top 10 players. He has three career wins over compatriot and current World No. 3 Rafael Nadal and a pair of wins over current World No. 6 Novak Djokovic. He also owns seven career singles titles on the ATP Tour.

Frenchman Gilles Simon will participate in the qualifying round at this year’s Odlum Brown VanOpen, and look to punch his ticket to the main draw. Simon, who announced in May that this is his last year on the tour before retiring, is a 14-time ATP Tour winner. His highest ATP singles ranking is World No. 6, which he marked in January 2009.

Simon, 37, is a 61-time Grand Slam main draw participant, making it as far the quarterfinals at the 2009 Australian Open and at Wimbledon in 2015. He beat No. 1 ranked Roger Federer in the second round of the 2008 Rogers Cup and then knocked off World No. 1 Rafael Nadal en route to making the final at that year’s Madrid Masters.

Jan-Lennard Struff is the fifth-highest ranked German player in the world at No. 123 and a former World No. 29, which he achieved in August 2020. The 32-year-old made it to the fourth round at Roland Garros just last year before falling to Diego Schwartzman.

In doubles, he reached the semifinals of the Aussie Open in 2018 and the quarterfinals at Wimbledon that same year. He was also a doubles quarterfinalist at the 2020 Australian Open. Stuff beat current World No. 1 Daniil Medvedev in the first round of last year’s Halle Open in his home country of Germany.

Galarneau was named an Intercollegiate Tennis Association All-American in 2020 and 2021 at NC State and earned First Team All-Atlantic Coast Conference honours in 2018, 2019, and 2021. Additionally, he was named to the All-ACC Academic Team in 2018 and 2019. Galarneau has one ITF Futures title each in singles and doubles.

“It is a thrill to have these players competing at this year’s Odlum Brown VanOpen. Verdasco, Simon, and Struff have competed on the biggest stages in our sport and hold victories over some of the best players in the world, while Galarneau is quickly rising up the ranks of Canadian tennis. We look forward to each of them showcasing their skills in Vancouver in less than two weeks,” said Odlum Brown VanOpen Tournament Director Rik de Voest.