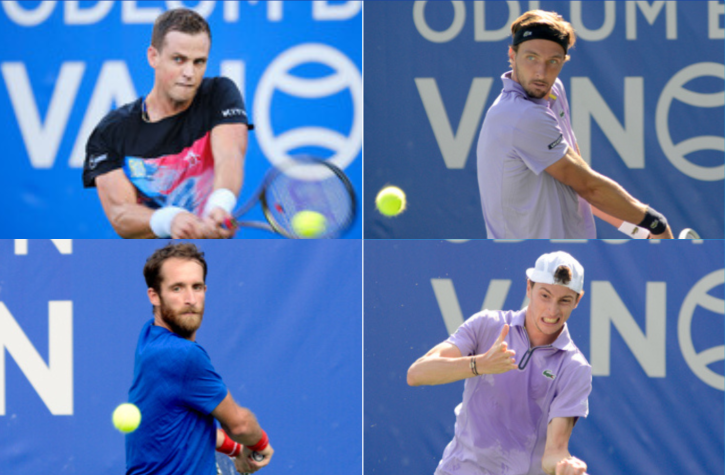 After cloud bursts of showers in West Vancouver during Friday’s play at the Odlum Brown VanOpen caused a total delay of more than 90 minutes, Vasek Pospisil of Vernon, BC earned a spot in the semifinals with a late-night win in straight sets over former World No. 6 Gilles Simon of France.

Pospisil, 32, dominated in the first set, taking it 6-1, but Simon pushed the second set to 5-5 before dropping the last two games of the match, which took just over two hours to play and ended just 15 minutes before midnight local time.

For the hometown favourite, Pospisil, who resides in Vancouver, admitted he didn’t feel as gassed as he did in his second-round match on Wednesday against Australian Jordan Thompson.

“I’m feeling a lot better today than the other day, that’s for sure. It’s still really physical, (the temperature) was cool, but obviously fielding all the points and playing so many balls, it’s really hard work out here and I’m sweating like an animal,” explained the 2013 Odlum Brown VanOpen champion. “I’m just going to try and rest and get ready for (the semifinal) tomorrow.”

Pospisil faces another French player on Saturday at the ATP Challenger Tour 125 event, as he takes on World No. 64 Arthur Rinderknech, 27, in the first meeting between the two. Rinderknech, who’s the third seed, booked his spot in the semis by knocking off defending Odlum Brown VanOpen champion Ricardas Berankis of Lithuania 7-6(3), 6-2.

The other semifinal sees fifth seed Constant Lestienne of France face countryman Ugo Humbert. Lestienne grabbed a spot in the semifinals with a 6-2, 4-6, 6-3 win against former World No. 7 Fernando Verdasco of Spain. Humbert earned his place by knocking off fourth seed and wild card Mikael Ymer of Sweden 5-7, 6-2, 6-2.

On the women’s side, the semifinals have American Emma Navarro up against Greek qualifier Valentini Grammatikopoulou and second seed Lucia Bronzetti of Italy faces fifth seed Rebecca Peterson of Sweden.

Navarro earned a spot in the semis with a 5-7, 6-2, 6-3 upset victory over fellow American and top seed Madison Brengle, and Grammatikopoulou continued to roll with a 6-3, 6-4 win against France’s Chloe Paquet.

Bronzetti topped Andorra’s Victoria Jimenez Kasintseva 7-5, 6-1 on Friday to advance to the semifinals while Peterson took out Aussie Maddison Inglis in straight sets 6-1, 7-6(5).