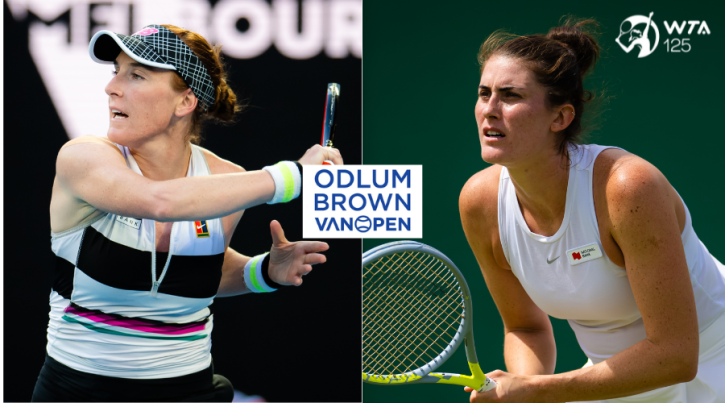 The Odlum Brown VanOpen is pleased to announce the women’s official player acceptance list for the $115,000 USD WTA 125 event from August 13 – 21 at Hollyburn Country Club.

Marino has been ranked as high as World No. 38 and the Vancouverite was also named Tennis Canada Female Player of the Year in 2010 and 2011. She first played at the Odlum Brown VanOpen as a 16-year-old in 2006 and returned to the tournament from 2007 to 2010, reaching the quarterfinals twice.

She is a 12-time Grand Slam participant and made it to the third round at Roland Garros in 2011. Marino is currently Canada’s third highest ranked women’s player – behind Odlum Brown VanOpen alumnae Leylah Fernandez and Bianca Andreescu. She won a $60,000 ITF Women’s World Tour event in the U.S this past March and is also a member of Canada’s Billie Jean King Cup team.

“With the upgrade of our women’s event to WTA tour level status, we are excited to see such a quality lineup of players this year. Fans will get to see a former top 10 player, a former No. 1 ranked doubles player, our past two champions, and a player who has a career victory over Serena Williams” said Odlum Brown VanOpen Tournament Director Rik de Voest.

“I am also looking forward to seeing some of the younger up-and-coming Canadian players who have done very well in the past couple of months,” added de Voest.

Of the other players on the acceptance list, Madison Brengle of the United States is ranked No. 57, Slovakian Anna Karolina Schmiedlova is World No. 76, Italy’s Lucia Bronzetti is ranked at No. 78, Xinyu Wang of China is World No. 80, American Claire Liu is No. 82, Rebecca Peterson of Sweden is ranked 93rd, and Belgium’s Greet Minnen is ranked World No. 99.

The list of players also includes the last two Odlum Brown VanOpen women’s champions, Heather Watson of Great Britain and Misaki Doi of Japan. Doi comes in at 107th in the WTA singles rankings and Watson is currently ranked World No. 121.

Brengle is a former World No. 35 who has reached the third round or better at six Grand Slams. She also holds four career wins over top-10 ranked players, including former World No. 1 Serena Williams, who Brengle beat in the second round of the 2017 Auckland Open. The 32-year-old is a 27-time winner on the ITF Women’s Circuit.

Bronzetti, 23, is currently ranked the highest she has been in her career. She reached the final of the 33rd Palermo Ladies Open earlier this month and the semifinals of a WTA 250 event in Morocco in May. Bronzetti also made it to the second round at the Australian Open earlier this year. She has five career ITF Women’s Circuit titles.

Wang is a five-time Grand Slam main draw participant, including as a 16-year-old at the Australian Open in 2018. She is also a five-time singles title winner on the ITF Women’s Circuit, including this past May at a $100K event in Spain. Wang, 20, has a pair of career wins over former World No. 9 CoCo Vandeweghe.

Liu, 22, won the biggest title of her career in May, claiming the crown at the inaugural Trophée Lagardère in Paris for her first WTA 125 victory. She won her first pro title in 2015 at age 14 and became the youngest player to do so since Anna Kournikova did in 1996. Liu won Junior Wimbledon singles in 2017 and Junior Wimbledon doubles in 2016.

Minnen is a nine-time singles title winner on the ITF Women’s Circuit, including the $60K Burg-Wächter Ladies Open this past February. The 24-year-old has played in the main draw of 10 Grand Slams and advanced to the third round of the US Open last year. At Wimbledon this year, she upset former World No. 1 Garbiñe Muguruza in the first round.

All rankings are current as of the WTA main draw cutoff rank date of July 18, 2022.