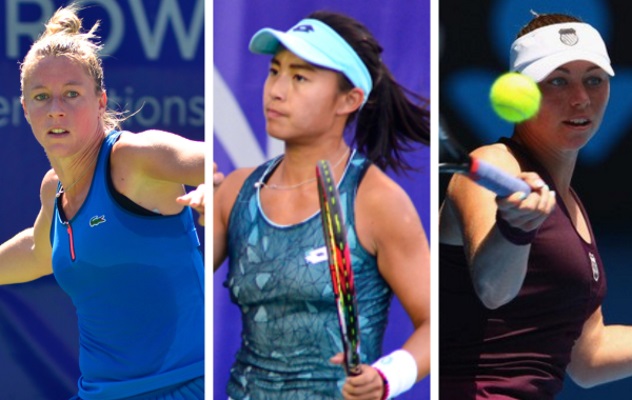 Organizers of the Odlum Brown VanOpen are pleased to announce the strongest field of women in the tournament’s history, scheduled to compete in the $100,000 USD ITF Pro Circuit event from August 11 – 19 at Hollyburn Country Club in West Vancouver.

“We are thrilled with strength and depth of the women’s field at the Odlum Brown VanOpen this year. Fans will be treated to some top-notch world class tennis and can watch players who have competed on the highest level of the game right in our own backyard,” said Tournament Director Rik de Voest. “We look forward to seeing everyone come out to support these top level athletes as they showcase their exceptional skills.”

The field includes six players ranked among the top 110 in the world. Pauline Parmentier of France is ranked No. 70, Ukranian Kateryna Kozlova is World No. 82, Belgium’s Yanina Wickmayer is ranked at No. 94, Ekaterina Alexandrova of Russia is World No. 98, Japan’s Nao Hibino is No. 104 and Arantxa Rus of the Netherlands is ranked World No. 105.

Parmentier has been ranked as high as World No. 40. She has three career WTA Tour victories, including this past April’s Istanbul Cup. Parmentier has appeared in the main draw of 42 Grand Slams during her career. The 31-year-old has played for the French Fed Cup Team since 2010 and represented France at the 2008 Summer Olympics.

Kozlova is the second player to defeat a defending champion in the first round of Roland Garros after she beat former World No. 5 Jelena Ostapenko there earlier this year. The 24-year-old Kozlova has been ranked as high as World No. 62. She has one career WTA 125K Series title, it came last summer in China. The Ukranian is a six-time Grand Slam main draw participant, twice advancing to the second round.

A former World No. 12, Wickmayer owns five career wins over players ranked among the top 10. The Belgian was named WTA Most Improved Player in 2009 and has seven career WTA Tour championships (five in singles, two in doubles). This is her third appearance at the Odlum Brown VanOpen, the 28-year-old reached the semifinals in 2015, falling to eventual champion and former World No. 4 Johanna Konta.

At Wimbledon in 2016, Alexandrova played a gruelling 108 games in just three matches after two three-set marathons in qualifying and a straight sets win in the first round of the main draw. The 23-year-old from Russia has been ranked as high as World No. 69 and played all four Grand Slam main draws last year for the first time in her career. Alexandrova also has won seven career ITF titles.

Hibino reached her career high of No. 43 in July 2017. The 23-year-old has reached four career WTA Tour finals, winning once. She also won the doubles title in Monterrey last year. Hibino was a member of the Japanese Fed Cup Team in 2016 and represented her country at that year’s Rio Olympics.

Rus has reached the third round or better three times at both the French Open and Wimbledon. She’s participated in 14 Grand Slam main draws and has been ranked as high as World No. 61. The 27-year-old also has career wins over former World No. 1 Kim Clijsters and former World No. 4 Samanta Stosur.

Zvonareva owns twelve career WTA Tour singles titles, including the 2009 BNP Paribas Open and was ranked World No. 2 in October 2010. The 33-year-old is also a two-time Grand Slam finalist, at Wimbledon and the US Open in 2010. Zvonareva is a four-time Grand Slam champion, claiming Women’s Doubles at the 2006 US Open and 2012 Australian Open, and Mixed Doubles at Wimbledon in 2006 and the US Open in 2004.

Zhao was a semifinalist at last year’s Odlum Brown VanOpen and won her first two career ITF Circuit titles last fall in Japan and China respectively. The 23-year-old from Richmond Hill, Ontario is currently ranked No. 2 among Canadian female singles players. The Stanford University alumna was the Australian Open junior doubles champion in 2013 and named most improved women’s player by Tennis Canada in 2017.

Andreescu is one of the top up-and-coming players on the women’s tour. The 18-year-old from Thornhill, Ontario is the reigning Tennis Canada Female Player of the Year along with singles player and junior player of the year. She was named WTA Breakthrough of the Month for July 2017 and captured girls’ doubles Grand Slam titles at the Junior Australian Open and Junior French Open last year.

The 24-year-old Zanevska is a 25-time finalist and 16-time winner on the ITF Women’s Circuit. She’s twice won at the Odlum Brown VanOpen, taking the Women’s Doubles crown with Canada’s Sharon Fichman in 2013 and the Women’s Singles title last year with a tough match against Danka Kovinic. The Belgian has won two Junior Grand Slams – in Girls’ Doubles at the 2009 US Open and the 2011 French Open.

The players on the list are in addition to Canadian tennis veterans Gabriela Dabrowski and Rebecca Marino, who last month confirmed their attendance at the tournament.