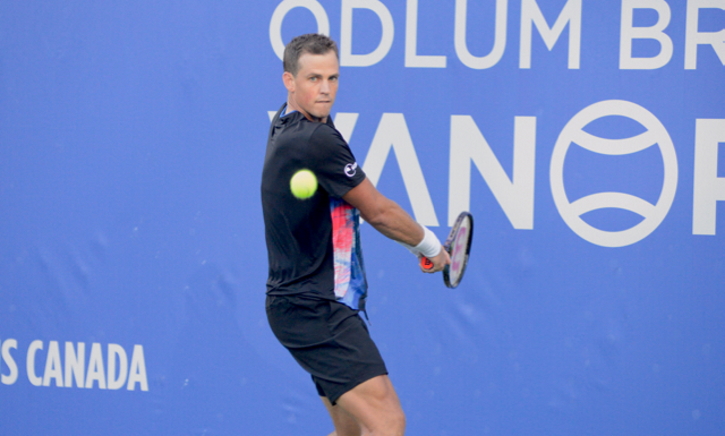 Home cooking tastes extra sweet for Vernon, BC’s Vasek Pospisil as the 2013 Odlum Brown VanOpen champion was back on the courts at Hollyburn Country Club in Tuesday’s evening feature match and knocked off Felipe Meligeni Alves of Brazil in straight sets 7-5, 6-3.

Pospisil, 32, has tried to find his game after dealing with an elbow injury earlier in the year. “It’s been a tough year, coming back from injury, (I’m just) trying to get some momentum,” he said post-match on Tuesday.

He’s currently ranked World No. 145 and Pospisil, who is a resident of Vancouver, relishes the opportunity to play in his own backyard. “It means a lot, there’s only a handful of events you can play here at home, here in Vancouver.”

“I think this is only my fifth time playing in the last twelve years here and it’s special to play in front of friends and family,” Pospisil continued. “It doesn’t happen a lot and it’s a little bit of extra pressure but at the same time, I actually really enjoy it. Especially summer in Vancouver, you can’t beat it, I love coming home.”

Pospisil’s opponent in the second round is Australian Jordan Thompson. The two face off on Centre Court in Wednesday’s evening feature match-up at the Odlum Brown VanOpen.

In other men’s action, 23-year-old wild card Alexis Galarneau advanced to the round of 16 after upsetting top seed Yoshihito Nishioka of Japan. The Laval, QC native dropped the opening set 5-7 before taking the second set 6-4. Nishioka, who’s ranked World No. 51, retired with an injury early in the third set on Tuesday night with the score at 0-0.

On the women’s side, all three Canadians in singles action on Tuesday dropped their first-round matches. Vancouver’s Rebecca Marino fell 3-6, 6-4, 7-6(7) to American Emma Navarro while wild card Eugenie Bouchard of Montreal lost 6-2, 6-2 to Arianne Hartono of the Netherlands. Wild card Marina Stakusic, who hails from Mississauga, ON, was ousted 6-3, 6-3 in her match against qualifier Priscilla Hon of Australia.